Columbia Gear is fast-expanding its large custom gearing production capability with the help of the new Gleason Titan® 1200H Hobbing Machine, and a host of other advanced Gleason gear production and inspection technologies.

At 235,000 sq. ft., Columbia Gear’s central Minnesota-based custom gear production facility is one of the largest in its field. More impressive still is the investment the company has made in putting the full array of productive new manufacturing capabilities under its roof. With a customer base that’s a Who’s Who of all the major OEMs in everything from energy to agriculture, earth moving to mining, and the ability to produce a vast array of small, medium and large spur, helical and spline gears to AGMA 15 quality, Columbia Gear relies heavily on advanced technologies to both meet demand and separate itself from the competition. Today, the company is pushing the technology envelope yet again – this time with a new two meter gear diameter production capability, and investment in Gleason’s new Titan® 1200H Hobber.

Columbia Gear’s investment in a Gleason P 1600/2000 Hobbing Machine in 2012 gave the company an important new capability: the ability to meet surging demand for gears up to two meters in diameter. Even better, the machine is equipped with a highly productive internal hob head that, when equipped with the latest indexable-carbide insert gasher cutter technology, enables Columbia to produce internal gears three or more times faster than possible with a typical shaping operation. The performance, and potential, have been so impressive, says Columbia Gear Manufacturing Engineer Ken Stommes, that the company raised the bar even higher this year with the purchase of a Gleason Titan 1200H Hobbing Machine, for gears with diameters up to 1,200 mm. “If the P 1600/2000 is good then we expect the Titan to be even better,” says Mr. Stommes, a 35 year Columbia Gear veteran. “Investment of this kind is the only way we know to stay competitive. Couple that with Gleason’s track record at Columbia of good service and support from both Ludwigsburg and Rochester and the Titan purchase made perfect sense.”

While the Titan is just now in the early stages of production, both Mr. Stommes and Columbia Manufacturing Engineer Chad Grewe speak highly of the new machine and its many capabilities. Most important, of course, is the machine’s ability to operate with the high speeds and feeds required to squeeze optimum performance out of the latest indexable-insert carbide cutters. This requires exceptional machine stiffness, rigidity and vibration damping that’s already in evidence, according to Mr. Grewe. “On the gear we’re cutting right now on the Titan (a timing gear for locomotive application), we’re using a carbide insert hob in an aggressive roughing cut on tough 4140 steel at many times the speed possible than with its HSS counterpart, and then fine finishing in a second pass, with no need for hard finish grinding downstream,” says Mr. Grewe. “Accuracies are phenomenal too; on this particular part lead tolerances of .002" were required, and we’re achieving .0006".”

Mr. Grewe also likes the way the Titan’s work area is designed both for ease of operator access and for optimum chip disposal – a key factor considering the high metal removal rates that can be achieved, and the need to keep the work area and workpiece free from chip contamination. “Whether we’re cutting dry with carbide or wet with conventional HSS hobs, Titan is very well designed and puts the chip disposal in the ideal spot, right in front of the work table and below the hob head,” he says. “We’ve had experiences with older machines in the past, where we’ve set up for dry machining and chip evacuation was a nightmare.”

It’s important to note too that both the Titan and the larger P 1600/2000 are equipped with a retractable tailstock, a ‘steady-rest’ and what Ken Stommes calls a clamshell. “This is handy because we can accommodate even very tall shafts where it’s not possible to put a center into the end,” says Mr. Stommes. “Instead, the clamshell wraps around the end to secure it.”

Fast and intuitive programming and operation.

With the new Titan, Gleason has introduced an advanced new operating interface that supports the latest generation of control systems, and the powerful new Siemens 840D Solution Line – all with the mission of making setup and operation faster and more efficient regardless of operator experience. Operators are led through the setup and manufacturing sequence using simple, highly intuitive menus. A continuous plausibility check helps ensure the safety of the operator and protect the machine from damage. If the P 1600/2000 was easy to operate, says Mr. Grewe, then Titan does it one better. “The process of putting in the inputs is similar but the way the screens are set up makes it even easier and more intuitive to use,” he says. “That’s important for our operators, given the wide variety of work we do here, and the need to bring operators up to speed quickly.”

While some of the large internal gear cutting previously done on Columbia’s shaper machines will now be done more productively on the new hobbing machines, shaping is still a key technology in Columbia’s extensive production repertoire, according to Ken Stommes. “For particularly tight-tolerance parts, or where the part is dead-ended with a shoulder, or where the part diameter is so small that gashing isn’t an option, then we of course use our Gleason Shapers,” says Mr. Stommes. “In fact, in just the last year, we’ve added a Gleason P 1200/1600 S with a hydraulically driven cutter spindle for very large internals, and two P 600/800 ES Shapers with electronic guide technology, so shaping is still a very important process.”

According to Mr. Stommes, the Gleason ES Shapers give Columbia a particularly significant competitive advantage for the production of larger internal helical gears, since the mechanical helical guides used on many conventional gear shaping machines present the user with significant disadvantages by comparison. “With the ES Shapers, we can produce the desired helix angle without the high cost, long lead times and long changeover time required to change a guide,” says Mr. Stommes. “Instead of waiting three or four months and spending thousands on a mechanical guide, we can do the helical internals on the fly with ES programming changes, and in addition achieve phenomenal accuracies.”

According to Mr. Stommes, the trend toward quieter, smoother running, highly reliable gears in every industry means that finish grinding after heat treat is becoming even more prevalent. “Even the farmer sitting in his cab has his stereo on these days and wants a quiet running tractor,” Mr. Stommes says. “And in the case of wind turbine applications, quality requirements are particularly stringent, when you consider that changing out a failed gear can cost upwards of $100,000. So we’ve invested as well in Gleason Profile grinders, helping us achieve accuracy levels as high as AGMA 15.”

Columbia Gear has P 1200 G and P 1600 G Profile Grinders, purchased in 2009, and two P 600/800 G Grinders that date back about 10 years. According to Mr. Stommes, these machines share a simple programming capability, and very high levels of productivity, as a result of Gleason’s powerful software. The shop-oriented, user-friendly Gleason dialog program, for example, supports the entire machining process. The machine operator calls up the required workpiece, tooling and technological data on a familiar Windows® based user interface. The NC part programs are generated automatically, eliminating the need for typical time-consuming programming.

Columbia Gear Inspector Don Ostendorf brings 21 years’ of experience to Columbia’s impressive quality assurance lab. But he says an operator with far less experience could easily handle many inspection jobs on their new Gleason 3000GMM Analytical Gear Inspection System. “It’s a smooth running, highly accurate and particularly user-friendly machine,” says Mr. Ostendorf. “But what’s impressive is how easy it is to program. Used to be you’d have to have a lot of knowledge about all the different standards we run through here, like ISO, AGMA, ZF 5005, and about 10 others. Now the GAMA software makes it so easy anyone can do it. Just select ISO for example, put in the class, lengths, and the usual part parameters, and off you go.”

In addition to the GAMA operating software, Mr. Ostendorf also makes daily use of a host of other software, including ‘journal reference’ to speed setup, ‘root scan’ and ‘root tip diameter’ to help define inspection parameters, ‘unknown gear’ and others.

“Years of experience, good service and support and proven results give us a comfort factor with Gleason,” concludes Columbia’s Ken Stommes. “Their technology solutions and, most importantly, willingness to support them, make all the difference.” 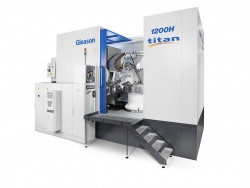 This website uses cookies and similar technologies to ensure that we provide the best possible viewing experience and service to our website users. By clicking on “Accept” you are agreeing to the processing of your data as well as its transfer to third party providers. The data will be used for analysis and to provide personalized content to website users. For more information see our Legal Notice and Privacy Policy. You can decline the use of cookies or change your settings at any time.

MyGleason provides you with more detailed information about products and events, including the download of product documentation.

We will save your personal data only for the purposes described on the register page and we will not forward you data to third parties.