Gleason has developed a milling machine for the first stage in the milling, hardening and grinding production chain in the manufacture of worm gears. The new machine is particularly suitable for operations which have to react to a wide variety of customer requirements coverimg a broad range of shapes and dimensions. The machine can be operated with both HSS and carbide tools.

Our  P 90 WM worm milling machine is characterized by a high degree of flexibility in use and a low investment requirement for its tools This is a particular advantage for the numerous job shops which often have only short lead times to provide a large number of customers finished products with constantly changing dimensions and quantities. Worm gears are used in numerous gear box applications in mechanical and machine tool products, in medical and X-ray technology and in plant engineering and construction. Their key benefits include a frequently high reduction ratio, low noise, the high torque which can be transmitted and controlled under load, something inherent in most designs which can be an important safety feature.

Milling – a particularly efficient production process
Different production methods are used for making worms depending on requirements and the number of items required. Though production on lathes requires the least investment, it is simultaneously highly uneconomical. Where quality is not such an issue, worms can also be produced similarly to screw threads without cutting, using the rolling process instead. Other methods include skiving and whirling, though these require the use of expensive tools designed specifically to suit the workpiece geometry in question, as well as complex machine technology.

Our P 90 WM machine, however, relies on the especially efficient milling process as the first stage in the production chain involving (soft) milling, hardening and grinding. Particularly accurate milling down to a grinding allowance of just 60 µm reduces to a minimum the time and cost required for grinding. This dimension can be as much as 2 mm with rolling which adds time and cost to the grinding process.

Flexible tool concept
The most important benefit of milling with the P 90 WM is great tool flexibility combined with a simultaneously low investment requirement. The newly-developed milling head is designed for tools with diameters of between 160 and 250 mm. The high drive output of 18 kW with the corresponding torque allows both HSS and indexable carbide insert cutters to be used. The large swivel range of the head allows worms of up to 7 starts to be made at a maximum module of as much as 8 mm.

The worm milling head has a high-performance drive which can be infinitely adjusted between 100 and 500 rpm (optionally 1,000 rpm). The workspindle is equipped with a maintenance-free direct drive which achieves speeds of up to 3,000 rpm. The high degree of precision of these drives allows the production of worms in quality classes up to 6 to DIN 3968. The maximum external diameter for workpieces is 90 mm.

Numerous extras
The P 90 WM is also fitted with numerous extra features. It is controlled by a latest-generation Siemens control unit with a color flat screen. It is the only machine of its type in the world to have a function specifically to reduce the sharp burr at the infeed and outfeed of worms (beginning and end of cut). The customer-specific tip relief at the outfeed of the worm reduces the risk of injury during handling. This function can be programmed in a dialog directly at the control unit by setting the parameters of up to four supporting points. Other special features include various loading systems such as H-grippers, rotating loaders or an NC-controlled loading gantry for workpieces weighing up to 14 kg. 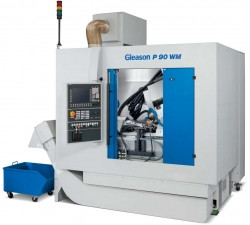 This website uses cookies and similar technologies to ensure that we provide the best possible viewing experience and service to our website users. By clicking on “Accept” you are agreeing to the processing of your data as well as its transfer to third party providers. The data will be used for analysis and to provide personalized content to website users. For more information see our Legal Notice and Privacy Policy. You can decline the use of cookies or change your settings at any time.

MyGleason provides you with more detailed information about products and events, including the download of product documentation.